It ain't supposed to be pretty...but it is.

Several things happen when you stand still too long. You can let the items around start to pile up and trap you, and you can focus your energies on keeping some things pristine that are meant to get beat up a little.

I'll leave the metaphysical aspects of those ideas to those who are more able to pay for the therapy that would better address them, but in my particular case, it means I'm beating up the notebook a little bit.

I love paper. I don't put pen to it often enough (thanks Macbook!) but when I do it, I really enjoy the tactile process of getting thoughts down on pulped wood. And when I ran across Moleskine notebooks a few years ago, with their oiled covers and thick paper that soaks up the ink, well, I'd found my personal professional fetish object.

The problem was/is, I'd buy them and not use them enough. Or not be able/willing to work them into my routine, such that it is. 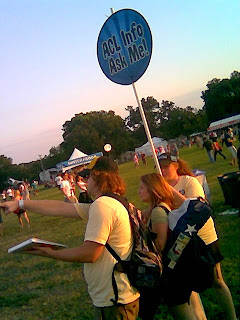 Not so much at ACL Fest. Sure, I've got the gadgets that go along with the modern day vagaries of infogathering (thanks M-Audio Microtrack!), but the Moleskine reporters notebook is getting the bulk of the action. It's the primary repository of info: stuffed with the ACL Fest pocket schedule, the BMI stage sked handed off by the lovely and talented Kay Clary, and notes about the 15 bands (a mere 32 percent of the overall Friday lineup) I've seen thus far.

The notebook is the thing I find myself frisking myself for most often...more than my phone, more than my wallet. It's my current lifeline, part Google, part safety blanket. And it's starting to show a little wear-and-tear...you know, like it's supposed to.

I'm looking forward to using it the rest of the weekend. And then I need to look forward to continuing to use it...beat it up some more while getting back out into the world.

It ain't gonna be pretty...but it is. 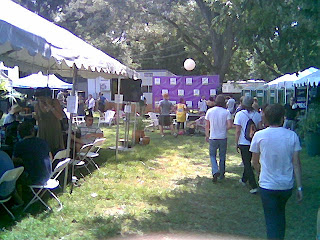 hey enough about old farts...enjoyed the manjia's and mostly the gab.

Sounded great on the Lahtnin' Live, bubba. All insider-y and such. Excellent work.

Glad you got back safely!