I don't do displacement well.

I like to travel, sure, but since I don't get to do it all that often, the sense of exploration gets dulled until/unless I'm quasi-comfortable with my surroundings.

Most of the time that takes time...or at the least, time spent with locals who know their way around. When those locals are friends you've known for years, it cuts that time down dramatically.

I still don't know where I am, but at least I feel safe being here.

I haven't spent a lot of time in Austin...just a couple times, quickly in and out, in college. And even in the attempt of covering music for as long as I have, I have ably resisted the siren call of the industry spring break known as South By Southwest for so long that it's kind of a badge of honor that I've never been.

But when the tumblers of opportunity all clicked into place for me to attend/cover/loiter at this year's Austin City Limits Music Festival (press creds, cheap plane fare, available gratis lodging), clearly I was destined to break my Texas capital drought. 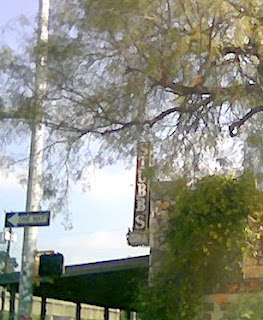 But back to the locals, in this case my friend Jenny, with whom I shared several of the joys and miseries of high school and one of the few folks from that part of my life I've kept in contact with. Jenny's been in the Austin area for a decade, and while she confidently and competently served as my tour guide for the late morning/early afternoon time frame of Day Zero, she blithely slid by a couple of Austin's musical landmarks without even recognizing their importance: places like Stubb's BBQ and the Continental Club.

(I'm sure we Nashvillains do the exact same thing when ferrying around knowledgeable music fans from other parts of the globe: "Oh yeah, there's Music Row/the Ryman/Tootsie's/the Bluebird/Robert's Western Wear, etc...")

And even in the midst of thinking about some of the epic performances that have taken place on those stages, I'm always struck by one thought about legendary clubs: They are, most frequently, pits. Holes in the wall. Or as Jenny put it, "Someplace you'd want to be packing a switchblade."

I was handed off mid-afternoon to another friend, Laura Harris, a ridiculously talented woman for whom this is the reversal of our normal interaction; I'm occasionally involved in transporting her to-and-fro on my home court, but after 12 years of friendship, the tables are turned.

One of Laura's other claims to fame within our little circle (aside from being one of The Coolest People We Know - Texas Division) comes from her genetics. Laura's father is a man named Bill Arhos, the creator of Austin City Limits the TV show, and one of the true characters in country music circles. 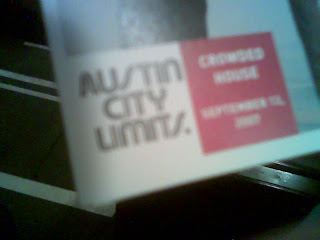 I'd never met Bill before Thursday night, but it couldn't have been more than five minutes into the conversation before he had me howling with laughter over his stories. I'm sure there were several people looking on with concern as I'm bent over in the middle of a street on the UT campus trying to catch my breath, but it was merely because I'd just heard the punchline on a story that involved a deer, a rifle, a Peugeot, a deaf-mute, the President of the United States and a pair of pajamas. And it was all true.

Though he retired from the show a few years ago, ACL is still "Bill's show" in many ways, as was evident when we entered Studio 6A and everyone came up to talk to him. Not wanting to intrude on any reunions, I wandered into the audience area and climbed up the bleachers to get a quick glimpse around the studio, with it's famed faux skyline wrapping around three walls and the fake foliage through which many a long shot has been focused.

(As I told Laura later, I had this very palpable memory from when I was a kid of thinking, "Where did they find someplace in Austin where they could shoot a music show outside?" Ah, the innocence of youth...)

Here's the place where it gets weird, where you wonder if the cosmic forces (take your pick) just want your brain to get turned sideways to see how you'll react. As I'm looking around the room and as people start to file in and fill the seats and the SRO area on the floor, a guy roughly my age, dressed fairly "industry-casual," and his wife take their places across the aisle from me.

I swear I know him from somewhere, but what with my penchant for being bad with names and faces together, I can't pull it out of the mental database. Well, mainly because I'm trying to place him from Nashville. 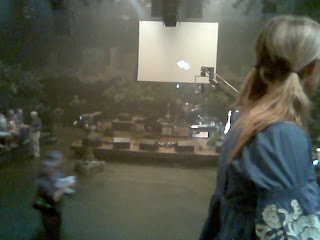 Just before the show starts (special guest: Crowded House, which I'll touch on in a minute), he leans across the aisle and asks, "Is your name Lance?" which is, oddly enough, the name mine most often gets confused for, but at least it tells me we have indeed met before.

I correct him, shake his hand, and he replies, "I don't know if you remember me, but my name is Brandon Laird." And the room started to spin, not only because here was a guy I went to college with, was on the college newspaper staff with, and hadn't seen in 17 years, but also because, I kid you not, I Googled his name the day before on a complete and total whim.

And so the displacement came full circle, but in a very cool way. Brandon and his wife, a Ph.D. in music who has written a book on the Louisiana Hayride and is working on one on ACL, are in town to bridge both festival and TV show (they're doing a boatload of tapings with all these great bands in town...when I heard the lineup, I thought "Screw the festival, I'm hangin' out here. It's air conditioned.").

So I sat in this television studio I've glanced at since childhood, across an aisle from a man with whom I spent a few late nights in our nascent pre-professional days, next to a woman I've known for a decade-plus (alongside the new man in her life), listening to recently reformed band from the other side of the world. And feeling completely at home.

Emptying the notebook from Day Zero: