You can't see everything.

That's the mantra you have to keep repeating to yourself at an event like ACL. There's just too much spread out over too much geography for one music fan to be able to draw it all in. 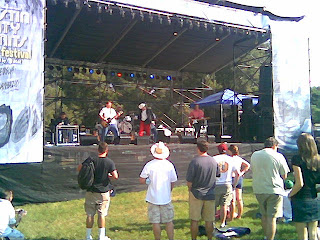 Saturday was no exception. I had the people who I'd interviewed that I wanted to see (Raul Malo, Kelly Willis, Sara Hickman), the Farm Rock Superstar who never fails to deliver a good time (Trent Summar and the New Row Mob), and the buzz bands about which I know some but want to know more (Arctic Monkeys, Clap Your Hands Say Yeah, Arcade Fire).

But then there are the things you miss that you give yourself the mental slap upside the forehead, channel your inner Homer Simpson but then deal with the regret. My quick hit list Saturday: Paolo Nutini, Blue October, Andrew Bird, Beausoliel, Nashville songwriter Jeffrey Steele (who got a solid mention on the Austin American Statesman's music blog), Cross Canadian Ragweed and Aterciopelados.

I can't even look at the back half of Sunday's lineup, because I'm gonna be on a plane.

You have to look at these things as buffets...you sample a lot of great menu items, you don't overstuff yourself on any one thing, and you wait till later to make a meal out of the ones you like best. And if you don't get around to taking a taste of something, there's always next time.

What - no mention of Los Aterciopelados? Don't leave me hanging Lucas!

There's a mention, dp, right there in the "D'oh" section. I didn't get around to seeing them, though according to the AAS music blog, I should have...