(This story appeared in the Monday, June 15 edition of USA TODAY.) 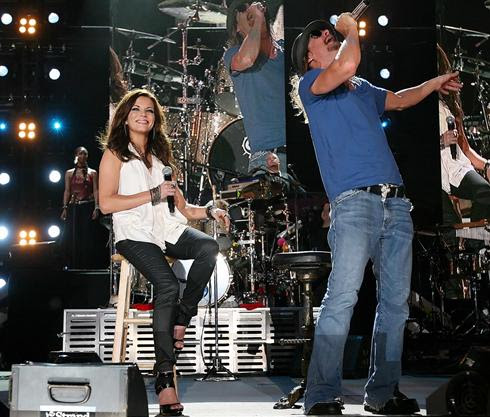 As one-half of what brought the music world's attention to Tennessee this weekend, Nashville's CMA Music Festival attracted thousands of fans and dozens of country artists. USA TODAY took it all in.

Get the party started: Rodney Atkins served as grand marshal for the downtown parade that kicked off CMA Fest Wednesday, an honor he didn't learn about until the day before and one that allowed Atkins and his family (wife Tammy Jo and son Elijah) to have time together before the hectic five days ahead. "She took her flip-flops off and she rode through the parade barefoot," Atkins said. "We just got to be ourselves, have fun and do it together as a family."

Shift into overdrive: The members of Little Big Town see the festival as the equivalent of a sports season's opening day. "It's the thing that puts it into the extra gear of summer," said Jimi Westbrook. While the group's Wednesday fan club party was at the beginning of the festivities, Kimberly Schlapman says planning for next year's bash starts before the last autograph is signed. "Every year when we finish a fan club party, we go, 'Here's what we're doing next year and here's what we're doing different, here's what we liked and here's what we didn't like.' "

Picking and choosing: Wednesday's most anticipated event was the Alan Jackson club gig marking his 20 years of hitmaking, and fans had to make some tough choices if they wanted to get in on the rare opportunity. "We had to leave (Little Big Town's party) to come get in line for a wristband for Alan," said Linda Stolting of Memphis. "We stood in line for about two hours to get in there, but we could only stay for a few songs."

So you're saying Alan Jackson wins out? "Every time."

Caution, superstar traffic ahead: Euphemisms about her looks aside, Kellie Pickler literally stopped traffic Wednesday afternoon while filming bits for ABC's CMA special airing Aug. 31. Coming out of the world-famous Ernest Tubb Record Shop on Broadway with TV crew in tow, Pickler was instantly mobbed by fans who moved with her in an amorphous blob as she attempted to cross the street.

"This is amazing!" Pickler squealed. "As long as everybody's having a good time and nobody gets hit, then it's great."

The future is now: Marty Stuart's Late Night Jam can usually be counted on as a place to find young and upcoming acts — but not always ones as young as the showstoppers called The Martin Brothers. Guitarist March, 11, and singer Kell, 8, are sons of Stuart's Fabulous Superlatives bass player Paul Martin, and the boys played and sang a pair of numbers with Stuart's band, garnering a standing ovation Wednesday night from the Ryman Auditorium crowd. "You don't have steady jobs and you've got a pretty girl driving you around," Stuart said, referring to beaming mom/vocalist Jamie. "Congratulations, boys — you're professional musicians."

That's dedication: A line started forming alongside the Nashville Convention Center at 9 p.m. Wednesday for signing sessions with Carrie Underwood and Reba McEntire that didn't start until 1 p.m. the next day. "As soon as we found out they were going to be here, we knew we had to be in line," said Amanda Breeden of Martinsburg, W.Va., who was in the prime spot for the Thursday sessions.

"I just can't believe the devotion and the support they always give," McEntire said after her session. "It still amazes me that they will come to Nashville and do that to get an autograph."

The trend presented itself again Saturday afternoon when fans started lining up at 3:30 p.m. for Taylor Swift's marathon session that began at 10 a.m. Sunday morning.

Where's a ShamWow when you need it? Heidi Newfield used CMA Fest to signal Thursday's launch of her fan club. "I wanted to wait until I got on my feet and really got some music out there that people recognized, and to make it a little bit more special," she says. But even though she's fairly new to the solo artist thing (she's formerly of Trick Pony), she's got years of experience with the autograph pen and a quick answer to the most difficult surface on which to leave her mark.

"A sweaty head is the hardest thing to sign," Newfield says. "Sharpie just won't stay on a sweaty, shaved head."

Twist and shout: Even though Bo Bice was able to use American Idol as a springboard to the music world's attention, he admits that he can still "goob out" when he sees somebody of whom he's a fan. That includes Steve McGranahan, the "World's Strongest Redneck," who performed one of his feats of strength for Bice on Thursday, hand-twisting a horseshoe into the shape of a heart. "This is going right up there with my gold records, dude," Bice said, beaming at McGranahan. "I'm happy."

When it rains …: A 3½-hour rain delay Thursday night prevented Rascal Flatts from performing during the nightly concerts at LP Field, but the power trio made its way through the press gauntlet before the downpour. Always looking to lighten the mood, Jay DeMarcus decided to engage in a little canine conversation during the band's photo shoot with USA TODAY, exchanging barks with Julianne Hough's spaniel Lexi.

Like almost every other act appearing during the week, Rascal Flatts talked about the importance of fans and how artists in other genres are coming to realize that today's music industry requires a new level of transparency. "You are naturally personable with your fans or you aren't," DeMarcus says. "That's not something anyone can teach you."

Avoiding sophomore slump: CMA's best new artist Lady Antebellum lit up the LP Field crowd Friday night like the seasoned performers they're becoming, but the band is keenly aware of expectations for a second record looming around the corner. "We'd be lying if we said there wasn't pressure," Hillary Scott said. "It keeps you on your toes, but you can't let it consume you because then you're off your game."

CMA Fest vs. Bonnaroo: The Atlanta-based, six-piece Zac Brown Band had one of the more musically diverse weeks, being one of two bands (bluegrass family outfit Cherryholmes being the other) playing both CMA Fest and Bonnaroo. But lead singer Brown noted the two festivals shared one important denominator: "It's two different demographics, but they're all just people wanting to hear good music."

When the going gets tough: Country rocker Jason Aldean hardly slowed down Friday, racing from his prime-time slot at LP Field across the river to the Wildhorse Saloon for a fan club show benefiting the Susan G. Komen for the Cure breast cancer foundation. If he was tired, he wasn't going to let it show. "You tell yourself that it's just a few days and they're the ones who give us a career and support us all year long, so it's a small price to pay," Aldean says.

Ring her up: Sometimes, it's as simple as picking up the phone. "He just called and asked if I wanted to do the duet with him, and I said absolutely," said Martina McBride matter-of-factly about performing with Kid Rock on Picture during Rock's "surprise" appearance Friday night. "He's a great guy and it was a blast. I had so much fun."

Bring Mom to Work Day: Though Wynonna has worked hard for her solo stardom, she does get excited about the occasional onstage reunion she and mother Naomi have as The Judds. Backstage before such an occurrence Saturday night, she admitted to nerves beyond what she normally experiences. For starters, "I never know what my mother is going to do or say," Wynonna says. Then "I never know what the fans are going to do or say to me on stage. It's somewhere between panic and peace."

Dude, where are you supposed to be? CMA media relations director Scott Stem talked about a reporter from a surfing magazine showing up for credentials because he'd been told to fly to Nashville and check out the music festival, likely meaning Bonnaroo. "We weren't going to turn him away," Stem said, "but he's probably going to look funny going home with stories about Reba McEntire for a surfing magazine."
- Lucas Hendrickson at 9:16 AM