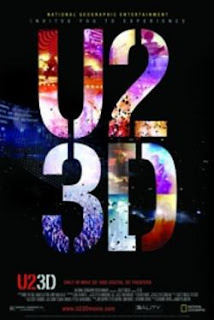 I was afraid to blink.

As frequently as I bemoan the freelance life, there are moments when flexibility of schedule is a great thing.

Like when you're able to take these elements and mix ’em together: U2. IMAX. 3D. National Geographic.

Much ado is being made about this being the first live-action concert film shot in 3D, and justifiably so.

The crowd shots were simply amazing. The desired effect was to make you feel like you were smack in the middle of the throng, watching people’s hands as shot up into the sky to cheer.

The dimensionality of those shots, combined with the fact that it takes up your entire frame of vision, achieves a level of immersion out of which you have to sometimes shake yourself.

But having seen U2 a handful of times this decade, I was more interested in pulling out those elements that remind you that it’s real, live people playing this music that 60,000 people have a call-and-response experience with.

The IMAX format makes that possible, because there are no small details. Everything gets context.

The hook on The Edge’s mike stand where he hangs his slide.

The wireless monitor pack attached to the back of Larry Mullen’s drum chair.

Adam Clayton’s sideways shuffle to the groove, remaining cool at all times.

“The Goal Is Soul” on Bono’s pickguard.

The setlist was interesting, drawing far more heavily from the ’80s era than from this decade, and certainly more than from the Popmart days.

They leaned on the human rights/political songs like Streets, Bullet The Blue Sky, Sunday Bloody Sunday and Pride, songs born out of Irish and American strife, but perfectly suited to (and known by) stadium audiences south of the equator.

The filmmakers didn’t lean too heavily on post-production graphics to amplify the live show’s effect, though what they chose to lift up really took advantage of the 3D capabilities, which I appreciated.

And there’s really only one overt usage by Bono of the ability to “reach out” into the crowd…and the women are gonna love it.

If you’re a U2 fan, hie thee to the nearest IMAX theater come January 23. You’ll be thrilled you did, and you’ll go diving into your CD stacks (or iTunes playlist, take your pick) for your copy of Joshua Tree.

(Thanks to Fenog for hooking me up.)