Requiem for a record store... 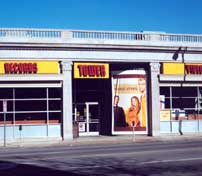 When I first came to Nashville in 1989 as a 21-year-old kid, part of my excitement came in living (for the summer, at least) in a town that had a Tower Records.

As a burgeoning pop culture/music business observer, I knew (tangentially, at least) about Tower's reputation as an arbiter of cool, not only from its West Coast roots, but as the chain expanded slowly across the U.S.

Record stores where I grew up were either lifeless, mall-based outfits or, let's face it, head shops, neither of which held much interest for me.

But Tower was different, with a deep catalog available right there on the shelves, magazines from all over the world, an eclectic video rental business, and a knowledgeable (if ever aloof) staff.

The western face of the building, the one that faced the narrow parking lot that only true Nashvillians knew how to navigate, featured handpainted reproductions of new and upcoming album projects, frequently artists with Nashville ties, but not necessarily the big names, the ones that didn't really need Tower's help to sell records anyway.

On more than one occasion that summer, I'd leave my Music Row internship and head to Tower just to browse. The filled-to-the-brim stacks highlighted names I'd only read about in the wilds of West Texas, and the beat-up headphone-enabled preview stations encouraged me to listen to things I'd never check out without it. I fed my love for music from Marshall Crenshaw to Amanda Marshall to Jellyfish to Patty Griffin to The Beatles to Poe to Will Hoge to dozens of others through the auspices of Tower.

Tower Records is going out of business. It got ridiculously easy to acquire music through means other than going to a store, so people stopped. Or at least slowed enough that Tower suffered. I'm one of them...but not for that reason. I write about music, so I get a lot of it sent to me automatically, not all of it good, as you might imagine. And I'm writing this while listening to the 2005 Austin City Limits Festival record streamed through Rhapsody, so I realize that I'm part of the problem.

But almost every time I had an hour to kill between meetings, or I was in the neighborhood, or just needed to reconnect to the current state of music retail through an outside arbiter of cool, I'd go to Tower and just browse. I won't get to do that anymore, and it makes me more than a little bit sad.

Update: I went to Tower over lunch, and there was just this palpable sense of sadness, among the staff and among the overwhelmingly over-30 set of customers browsing and sighing. There were also a couple of news crews interviewing folks in the parking lot and taking shots of the various "Going Out Of Business" signs going up all over the building.

On the "good bargains" front...well, we're not quite there yet. Magazines are 30% off, books 20% (which is why I picked up three I'd had my eyes on for awhile: The Rock Snob's Dictionary, The Areas of My Expertise and Superheroes And Philosophy) and the CDs/DVDs 10% off...but it's off the regular price, which tends to be $18.99. So the real bargains are going to be a few weeks away...I may be sad, but I'm still a cheapskate.
- Lucas Hendrickson at 11:04 AM