The past catches up with you... 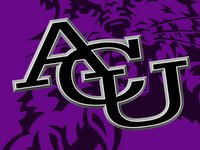 Yikes. I've been found out.

You nailed it on the head, Darren. Blogging for me is the textbook definition of "busman's holiday." I like to get paid for what I write (capitalism...yay!), and the thought of trying to build any sort of plausible audience through my own word of mouth is, to me, laughable.

Anyhoo, thanks for the mention...I think. Seemingly unlike most ACU-X bloggers (including my friend and Belmont colleague Mr. Hobbs), my blog thoughts probably lean a little more to the left than some would imagine and others would be comfortable with. So be it.

I'll try to be the Colmes (albeit, hopefully, packing a touch more on the cojones side) to whomever's Hannity...but all in the name of informed debate and civilized discourse. You won't drag me into a name-calling contest, you miserable, vomitous mass.

Regardless, it's been fun checking in on other late '80s era Wildcats through your blog(s), not to mention having the crap scared out of me via the Bird Flu posts, so let's keep the various dialogs (dialogi? multilogs?) going, shall we?
- Lucas Hendrickson at 6:34 PM