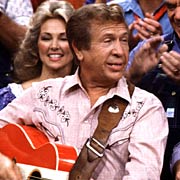 For any self-respecting kid in the late '70s/early '80s, the last thing you wanted to enjoy was Hee Haw.

There it was, every Saturday night at 6:30 (or thereabouts, depending on your local affiliate and their syndication agreements), chucking out non-stop corn-pone humor littered with country stars of the day.

Until I got a little older and started to understand the nuances of country, and started to develop an appreciation for artists like George Jones and Johnny Cash. (Later, after moving to Nashville and finding out the breakneck pace at which they produced an entire season of the show in a couple weeks, I was even more impressed.)

Right there in the middle of it all were Roy Clark and Buck Owens.

I have to admit: I was more of a Roy Clark fan, finding him the much more compelling instrumentalist and a much more natural comedian.

But when you started to look at what Buck Owens meant, not only to Hee Haw but to other influential figures within pop music, you had to give him his props.

I've had "Act Naturally" stuck in my head ever since word came of Buck's death this past Saturday. I never met Buck, but was in the press room at the CMA Awards the night he was inducted into the Country Music Hall of Fame. His spiritual protege Dwight Yoakam did the honors, and the two of them came back to face the ink-stained and/or blow-dried wretches of the music press.

Bob Dylan's ramble/rant at the Grammys a few years earlier was crystal clear compared to the run Buck went on that night, and while to this day I still don't know what he was talking about (or was on, really), I'd like to think in Buck's head it was something profound.

I'm SO with you on this, Lucas.