Those seemed to be the themes radiating through night two of U2’s five-night Chicago stand on the “Innocence and Experience” tour, something that probably got lost amidst the most sophisticated live concert production I’ve ever seen. 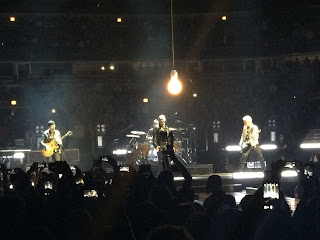 The pain, if you were looking for it, could easily be seen on Bono’s face as he made his way through the night. The tour’s stage set-up — fairly spare main stage at United Center’s west end and circular satellite stage on the far east end, connected by a thin walkway connecting the two — allowed the general admission crowd on the floor almost unheard-of proximity to the band all night.

Via that close-up look, you could note Bono’s wincing at various parts of the night, likely result of the bronchitis he’s allegedly been battling through as the band started its Windy City residency. He didn’t miss many notes, but he didn’t swing at all of them, either, letting the crowd fill in the gap, which it was happy to do.

The flip side of the thematic coin — the loss — could be noted in the new tunes from the now-legendary (for better or worse) “Songs of Innocence” album. After a four-song kickstart featuring the “Innocence” song with the closest to a classic U2 hook (“The Miracle (Of Joey Ramone)”) combined with three songs with actual classic U2 hooks (“Out of Control,” “Vertigo” and “I Will Follow”), the band slowed it way down with two of the most autobiographical songs (at least for Bono) from the new record, “Iris (Hold Me Close)” and “Cedarwood Road,” the former Bono’s lament for his mother who passed when he was 14, the latter an homage to the family home that spawned his love for what would be both his chosen profession and lifelong obsession, music. 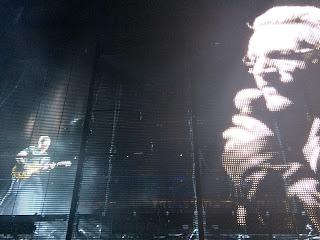 And it’s with those two songs that the production side of the show kicked into high gear. The opening four songs were a reminder that this is still a four-piece band that will rock your face off if you give them the chance.

The back half of the first set featured the genius visual elements the team brought into play via the giant video “wall” that stretched across the length of the venue from main to satellite stage. The wall raised and lowered and displayed amazing treatments depending on who was playing on, near, under or within it.

My all-time favorite live U2 song, “Until The End of The World,” closed that first set, with the tremendous visual of The Edge playing inside the video wall’s confines, with Bono singing on the satellite stage, whilst his image and his antics — reaching out to virtually grasp his guitar genius partner, spitting water at him, essentially underscoring a certain god complex — brought the frontman’s legendary (and self-described) megalomania to projected perfection. 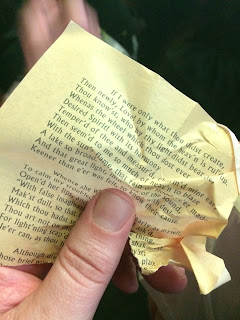 And then when all eyes were focused on the technological spectacle of song, down fluttered torn pages from books, more symbolism for the downfall of the world (the shard I caught was from a copy of Dante’s “Divine Comedy”…have fun with that metaphor), closing out the set in epic Irish and Italian fashion.

A one-song intermission, bringing to virtual life the Johnny Cash-sung “The Wanderer” on the video wall (I might have been the only one on my side of the floor who cheered, but so be it), and the band was back, all of them within the wall for the new album song “Invisible.” The wall’s capabilities literally shone through again, with the video treatment revealing then hiding each band member as the song progressed.

Combine the wall’s importance with the impressive PA rig that ringed the entire arena with barely noticeable, yet sufficiently effective speakers that made it sound like sound was coming from everywhere at once, and it was easily the most well-thought out and executed production I’ve ever seen…and this is the seventh time I’ve seen this band.

Yet, this band never seems to forget the human element, especially in the three-song set that can’t be described as anything other than…sexy. “Even Better Than The Real Thing” into “Mysterious Ways” then a gathering on the satellite stage and bringing up a young woman bearing a Costa Rican flag, who then turned into their Meerkatographer for “Angel of Harlem.” The band had fun, the girl had fun (even though she shot most of the song in “tallscreen” which translated horizontally on the video wall”) and the crowd completely dug it. 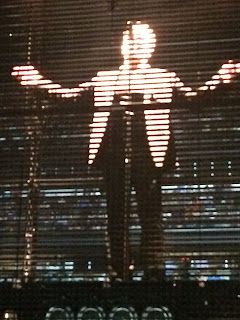 After two more “Innocence” songs, the pain theme cycled back around, this time via “Bullet The Blue Sky.” Again, it was another song that found Bono up and down the room, raging against and due to the narrative, wincing visibly both with microphone and star-spangled bullhorn, shouting into the wind about the tragedies of Baltimore and Ferguson and Charleston. And it made me wonder — and ultimately tear up for him and for us — what it must be like to sing that song 28 years in, knowing and loving America as an idea as much as a country, and seeing that we just keep inventing new ways to injure ourselves as both an idea and a country.

It made me hurt, standing there in a crowd of strangers, knowing how much pain there must be in that room, including mine, not to mention ours at a nation. I was in very real danger of being crushed by it, mentally and spiritually…and then three very familiar chiming chords pulled me from the depth.

“Pride (In The Name of Love),” reminding once again to never underestimate music’s ability to rescue us.

The crowd was back in Bono and company’s hands for the hit parade that followed, from “Beautiful Day” to “Bad” to “With Or Without You,” and the encore set of “City of Blinding Lights,” “Where The Streets Have No Name” and the Paul McGuinness-dedicated “One,” the vocal duties for which Bono handed over to the crowd, and it delivered in spades.

It was a night I needed: I traveled to Chicago by myself, had several random days meeting new friends in the beer biz as well as just seeing sights as the whims came up. As a music fan, it was great to just let go and be a fan, meet people who like me had traveled from elsewhere and were thrilled to be in the room. We yelled, we sang, we sweated, we listened.

I met another 6’7 gentleman and his family from Cleveland, his wife and three teenage daughters who were just as geeked about seeing U2 as Dad was. We stood side-by-side, probably to the chagrin of several dozen fans around us, and let the music and the experience transport us to our younger days. 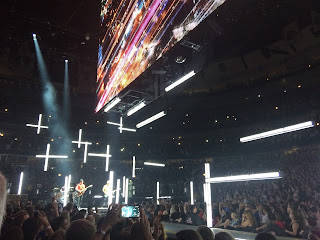 The last time I saw that band in that building, it was 10 years ago, and we weren’t nearly as invested in attempting to capture the experience via our flip phones. Concertgoing in 2015 is a very different beast, with 20,000 smartphones trying (and most likely failing) to chronicle the process. Who knows what that’s gonna look like 10 years hence?

But if that band is in that building a decade from now, and a certain 13-year-old will deign to go with me, I’ll be back.

Thanks, Chicago. And thanks Bono, Edge, Adam and Larry. Be well and travel safe.
- Lucas Hendrickson at 9:53 PM