The Next Fourscore Years

We've all been asked -- some of us very recently and with a surprising amount of rancor -- if we're better off than we were four years ago.

If you can answer that simply and succinctly, I'd wager you haven't had a very interesting life over the past four years. 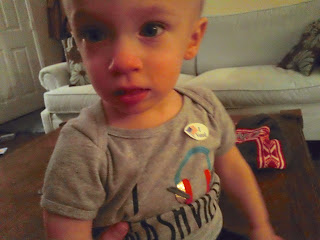 I want him to grow up in a country of which he can be proud.

I want him to grow up in a country where acquiring a good education isn't viewed (or priced) as a luxury.

I want him to live in a country where he knows he can speak his mind, publish his thoughts, question his leaders, worship as he chooses, and that his birthplace isn't as focused on the "under God" phrase of a 31-word pledge as it is with that pledge's final stanza, "with liberty and justice for all."

I want him to live in a country where he can marry the person he loves without hesitation or restriction.

I want him to live in a world that, yes, recognizes there is evil living in it. But also one that recognizes words are ultimately far more effective in diffusing that evil than guns and bombs.

I want him to live in a world where fear and panic have their place, as a means to spur individuals to action, not as a wedge to keep an entire populace on edge, much less as a way to make money or get a gig.

I want him to live in a world where reason and logic and respect and science and art and music and knowledge and, yes, freedom are treasured, and to have the country of his birth lead that charge.

And I want him to see the original, non-futzed with Star Wars movies in a theater, box of popcorn at the ready.

I don't know how much of this I'm going to get to see happen. I don't care if this makes me naive. But there's one thing the presence of this tiny human has given me, and that's hope. I would be remiss -- strike that, I'd be a bad dad -- if I didn't acknowledge that hope and help try to make it real.

Well said and agreed on all points sir.

A little child, surrounded by his loving, wise family, indeed shall lead us. We just have to take care of this world properly until he can.

And I for one continue to welcome our smiley overlord.

When do you move to Denmark?

Can those of us who agree live there too?