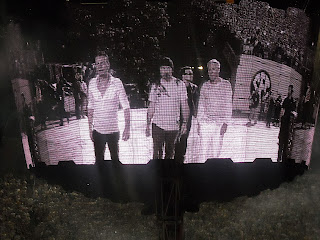 I made a vow to myself that I would experience U2's first Nashville show in three decades through the highest-res image processors I possess...my own two eyes. OK, yes, I did have my crappily trusty Nikon point-and-shoot, but other than that, I was bound and determined not to tweet the show away, to live in the moment that was in front of me.

I maintained radio silence. I reveled in the event taking place. I sweated my posterior off. And I was reminded of the simple power of rock 'n' roll, and the humanity of people who do it really, really well.

That doesn't mean I wasn't thinking in 140-character chunklets. So imagine, if you will, what I might have said had the phone been on...

(UPDATED 7/5: The Gigapixel Fan Cam shot from Vandy is up. And the shot of me couldn't be any more meta if it tried. I swear on all that is holy...I didn't know they were shooting the picture at that very moment.)

Best part of the #U2VU run-up for me? Reconnecting with "Achtung Baby," a record that bridged two eras, and I'd never really been a fan. 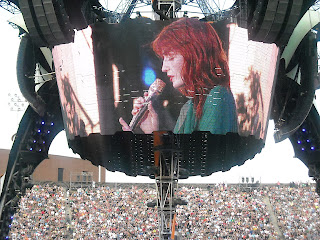 Again, hoping the support acts on this tour realize the respect they're given by the band, because Florence + The Machine sounded amazing.

Gotta think the sweaty denizens of The Circle were thinking this thought as Florence sang "Dog Days Are Over": "Um...no. No, they're not."

The main thing F+TM's set did was make me want to see them @TheRyman. That voice in that room? Would be nothing short of spectacular.

The other thing Florence's set did for was a little more visceral. I mean, come on...a statuesque redhead in a diaphanous emerald dress?

(Wondering if I've sent any of you scrambling for a definition of "diaphanous"...) 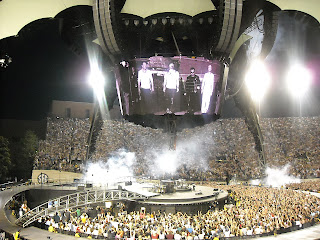 On to the headliners. "Space Oddity"? Check. Walk-up shot of the band? Check. Launching with "Even Better Than The Real Thing"? OH HELL YEAH.

After the Anaheim audience and twittersphere both exploded two weeks ago, they had to have thought, "Yeah, let's keep this opening sequence."

And to have "Mysterious Ways" and "UTEOTW" back-to-back? They coulda said "thank you and good night" right then and I'da gone home happy.

When Bono yelled "Music City!" it generated the biggest hometown pop I've ever heard. And a big stupid grin from me. I love my town. 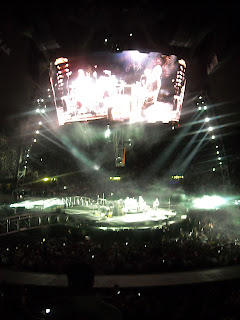 That's not to say there weren't moments when "music industry Nashville" showed up. But I'm going to attribute most of that to the heat.

It was, by far, the cleanest sounding stadium show I've ever heard. They've got that sucker dialed in, which you'd expect after 100 shows.

T'was in The Circle for the Atlanta show in '09, so didn't see all the production elements until now. They use every trick in the bag...

...yet it never seems egregious. Every cue, song treatment, concept piece vs. straight video of the band...every decision is the right one.

Thrilled to hear seven people I know and respect get name-checked from the stage, even if one got his quasi-iconic middle initial mangled.

You knew they were going to tip their caps to Johnny Cash. I mean, you just *knew* it. And by god, they broke out "The Wanderer."

Best part was watching Bono huddle with Edge to cue it up, and then struggle over doing it a la Cash vs. finding it in his own voice. 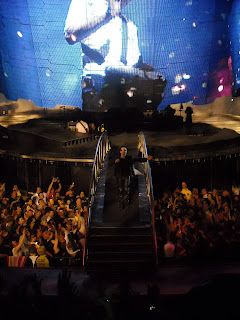 The perils of a three-decade career and a much-beloved catalog of songs? Something you adore is gonna get left out of the setlist.

For me, it's usually "Desire" and "Angel of Harlem." I am an unabashed sucker for the stuff off "Rattle And Hum."

For others, it might have been reaching the tour-long closer "Moment of Surrender" without hearing "All I Want Is You." Little did they know.

In the moment, sans any other information, I thought, "Wow, he's drunk. Why did he get pulled up?" Then he played, and the script flipped.

The thought then became, "Only in Nashville can you pull a random guy up out of the pit and have him competently and confidently play that."

Then you get the real story, which we heard from a reliable source on the way out of the stadium. Getting teary just thinking about it.

Seriously, watch this. If you don't have some sort of emotional reaction, then god, Jed, I don't even wanna know you. http://youtu.be/xNZjfz8rgT8

For all the flak these guys take about what they do (Bono especially), we've consistently seen these kinds of humanizing acts for decades.

From pulling that girl out of the crush at Live Aid in 1985 to Saturday night, you can draw a thread of them doing stuff like this all along. 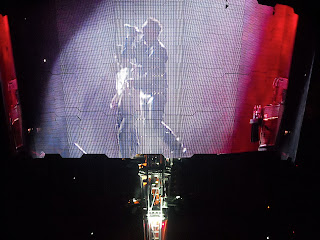 This band made this guy's LIFE last night. And the rest of us get a little more human by extension. Not a bad gig if you can get it.

Thanks to @cdlowell and @mattwertz, don't have to type the setlist. Yes, technology is occasionally good for something. twitpic.com/5kmo31

Pleased to see so many people I like, love, admire and am challenged by have such a transformative experience with this show. Hope it lingers.

UPDATED: The Gigapixel Fan Cam shot from Vandy is up. And the shot of me couldn't be any more meta if it tried. I swear on all that is holy...I didn't know they were shooting the picture at that very moment.
- Lucas Hendrickson at 1:26 PM

Woah. I had no idea that guy was blind...finding out brought tears to my eyes. What an amazing night....

Nice review, felt like I was there! There's one song I've never heard them perform live that I've wanted to hear: Two Hearts Beat As One. Never heard them do that one. Did they do it? Cool video.