Why I'm going to (working with, writing about, otherwise endlessly promoting) PodCamp Nashville… 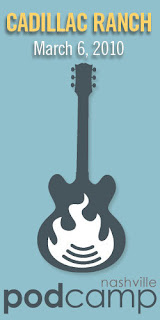 We're in a new age of media creation and consumption the likes of which we've never seen before. We have more tools, we have more avenues, and more choices to be made than ever before.

But it still comes down to who is saying what to whom through what channel and with what effect. (Otherwise known as the Lasswell model for you communication geeks out there)

However, "where" is an important part of it as well. Nashville is as vibrant a media creation community as there is in this country and probably the world.

Obviously, we've got the music. But there's an incredibly active publishing, visual arts, photography and technology community that needs knitting together. PodCamp Nashville can help accomplish that.

(Ok, that wasn't so much a rephrasing as it was screaming at you that IT'S NOT JUST ABOUT PODCASTING.)

The PCN Crew (a lovely and talented group, I might add) has chosen the tagline/catchphrase "Find Your Digital Voice" and not without a touch of conversation and controversy.

But again, because IT'S NOT JUST ABOUT PODCASTING, we think PodCamp can be that place where, if you're an enthusiast about digital content, both creating and consuming, you can go and expand your horizons.

Similarly, if you're a digital media expert, from image editing wizards to top-notch videographers to social media entrepreneurs to, yes, podcasters, and you have skills you can share, we heartily encourage that as well.

We keep bandying about the phrase "unconference" as both a style and an ethos, but even more as a storytelling point.

What it really means is that it's an experience created by the people who get involved, both the speakers and the attendees. We're not telling you what to think or even what to think about (the traditional role of mass media, if you've ever been one of my students)…we're just giving you the venue at which to think.

That said…what are you waiting for? If you're interested in attending, create a profile and sign up at www.podcampnashville.org.

If you're interested in speaking, create a profile and sign up at www.podcampnashville.org, then click on "Create A Session" (starting Feb. 9…but start thinking about what you want to say now…)

If you're a company flush with cash and a desire to get in front of an active slice of Nashville's digital community, then we reaaaaaaaally want to talk to you, and encourage you to check out the Sponsor page linked here.

If you're an interested newcomer in the world of digital media, or if you a seasoned pro just looking to get an energy boost about your chosen field of interest, I can guarantee you'll find something that will fit your needs Saturday, March 6 at Cadillac Ranch.

I'm so confident of it that, if you're not satisfied, I'll give you your entrance fee back.
- Lucas Hendrickson at 12:09 PM