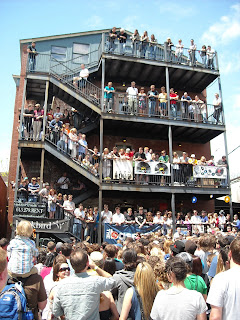 Scant moments after this shot was taken, I could feel a music-spawned smile form on my face.

(And, no, it wasn't because I was most of the way through a Yazoo Hop Project #14. Though it certainly didn't hinder the process.)

I felt myself smiling because not only was standing outside of Grimey's New and Preloved Music/The Basement on a glorious mid-April afternoon, listening to a band that I've become very fond of -- the stompgrass stylings of The Avett Brothers -- but also because there were hundreds of others, mainly college-aged kids, doing the exact same thing.

And singing along with every word.

A bulk of this crowd was in near-constant motion -- jumping 'round, pumping fists, pointing their heads to the bright blue sky as they bellowed out lyrics. And I thought it was fantastic.

Because with the constant talk of artists having to take it upon themselves to pluck fans one at a time out of the ether...and music fans having to act as their own de facto A&R folks and wade through the miasma of music being "released" every day...it was heart-warming to see a young band and their young-and-growing crowd be able to stop that process for a little while and enjoy each others' company.

From another fan perspective...

That picture of alllll those people lined up along the steps and the balconies gives me goosebumps!

Is 14 the designation of the Yazoo project, or is it the number of Yazoos you'd consumed? Not judging, just asking...

It was the numerical designation of the Hop Project, not the number of pints consumed...

I tend to keep that number under double digits...mostly...