The continuing saga of Doyle & Debbie...

They've continued on their 20-year path to stardom, they got their second go-round on national late night TV, they've clearly upgraded their outfits. So, now's a good a time as any to roll back out the "unauthorized" biography of America's Country Sweethearts(tm), Doyle & Debbie...

Few things quicken the pulse of a veteran performer like stepping back into the spotlights after such a long time away.

The year just past saw that phenomenon happen for many of the biggest names in music: The Police. Led Zeppelin. Garth Brooks. And now, Doyle & Debbie. 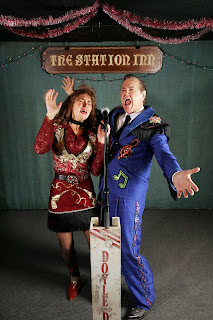 As one-half of the big dogs on the top rung of the fourth tier of country music’s greatest duos, Doyle Mayfield has seen his share of the triumphs associated with limited regional success. In the late ’80s, you could barely turn on your radio in western Idaho and south central Alabama and wait five or six hours without hearing Doyle & Debbie’s breakout hit “Stock Car Love,” which Mayfield performed with first partner, later second wife, Debbie Gentry.

“I knew just as soon as we hit ‘stop’ on that Tascam four-track cassette recorder in 1988 that ‘Stock Car Love’ was gonna be a hit,” Mayfield says. “My wife at the time, Darlene, wondered what I was doing spending all that time in our spare bathroom with Debbie, but when I waved that tape in front of her face and said, ‘Baby, this is the ticket to the good life,’ she understood.”

Neither Darlene Mayfield Schwartz nor Debbie Gentry Mayfield could be reached for comment.

After Mayfield and Gentry married in 1989 and as the first incarnation of Doyle & Debbie toured relentlessly into the early ’90s, hits like “Grandma Flickertail” and “Whine Whine Twang Twang” made their way onto low-power radio stations and truck stop compilations alike, filtering back to Mooney’s Gap, Tenn., one of Mayfield’s five childhood hometowns.

It was back in Mooney’s Gap where those recordings made a dramatic impact on young Debbie Purdy, who had her own dreams of stardom, albeit dashed by very early motherhood.

“I knew every song in the Doyle & Debbie catalog inside and out,” Purdy says, “and so many of them I took to heart, like ‘Barefoot and Pregnant.’ It’s like they were singing about me right in my face, and the fact that Doyle was from my hometown made it that much more exciting.”

As the early ’90s rolled along, the dramatic changes taking place in the country music business mirrored the turmoil in Mayfield’s life. In the midst of a 1993 promotional tour stop in Uvalde, Texas for their latest single “Coochie Coochie Coo,” Mayfield meets another young singer named Debbie, surname Cochran, and decides to take her on as the first client in his short-lived management firm, El Pollo Diablo Productions.

“I had a certain fondness for mescaline at the time, so I’m not sure what I was thinking, bringing two Debbies into my life at the same time,” Mayfield says.

It was the transition into 1994 that showed the most potential for success for the act, rechristened “Doyle & Debbie & Debbie” for single long weekend in Reno before dropping back into the more familiar duet formation with Cochran now in the primary Debbie slot, and Gentry taking an “extended hiatus” from touring, which lasted until her divorce from Mayfield in March of 1995.

With Cochran in the fold, Doyle & Debbie notched another moderate hit in Utah with “When You’re Screwing Other Women.” D&D were poised to jump into a much bigger spotlight with “God Loves America Best,” which was scheduled to be the theme song for George W. Bush’s first gubernatorial campaign in Texas, until an unfortunate incident at one of the first campaign rallies, the details of which remain sealed by federal court order to this day.

Still the song remains a linchpin of the Doyle & Debbie live experience. “I don’t look at that song as so much ‘pro-war,’ as ‘pro-military/industrial complex,’” Mayfield says. “It says to me, ‘Look at how great America is: we can entertain you and we can blow your [expletive deleted] up at the same time, using materials from the exact same company.” 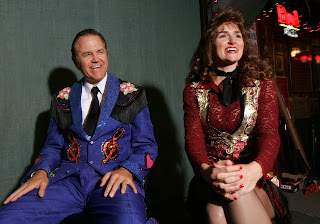 Meanwhile, back in Mooney’s Gap, Debbie Purdy embarked on what she imagined would be her final pit stop on the race to the checkered flag of superstardom with a New Year’s Eve gig at the Mooney’s Gap VFW Hall. Little did she, or eventually her three children, know that the one night stand would turn into 12 years of performances on that tiny stage. “They were so good to me at the VFW,” Purdy says. “They even gave me a little plaque the night I sang ‘Stand By Your Man’ for the 10,000th time. I was touched they kept count.

The strain of the small pockets of nationwide success started to show for Doyle & Debbie during the back half of the ’90s. Cochran and Mayfield married in January 1996 and divorced later that same month, but continued on as a duo, notching another minor hit with the ode to conjugal visits “Death Row Jethro.” Cochran stayed with the act until late 1998, when Mayfield announced to a festival crowd in Butte, Montana that he could take any woman in the crowd and make her into what he called “my next Debbie.”

Debbie Cochran Mayfield Stephens O’Leary could not be reached for comment.

Mayfield doesn’t like to talk much about what he calls “the bump in the road,” or what country music historians call “the Debbieless Years” of 1999 through late 2007, though there were plenty of “part-time Debbies” Mayfield auditioned for the role. “The problem is gettin’ ‘em to wanna change their names. If they’s worth a damn, they want their own name,” Mayfield says. “So either you settle for someone with a average voice who’s kinda needy, or you find a good one already named Debbie.”

April “Debbie 3” White, Shelby “Debbie 4” Miller, Jackie “no, not that one” Collins, Jacquelyn “Debbie 5 and 9” Parker, Shelley “Debbie Mark VI” Parker, Jennifer “Debbie for a Day” Kirby, Loren “Debbie 8” Dennihy, and Jasema “Debbie X” Colley all could not be reached for comment.

That’s also not to say Mayfield didn’t attempt to make it big on his own, albeit in a slightly different fashion. In August of 2000, Mayfield attempted to challenge comedian/newly minted Monday Night Football commentator Dennis Miller to a fight after Miller’s off-hand comment about touring a Nashville “sequin mine” during a preseason broadcast.

“That got me fired up right quick, some know-it-all Yankee comin’ to my adopted hometown and sayin’ something like that,” Mayfield remembers. “Once I found my keys and got that Geo Metro jumped, I high-tailed it to Adelphia Coliseum and waited for that no-good so-and-so to come out.

“But turns out I blacked out from the excitement and the Loratabs, and didn’t realize it was three days later. I wondered why the parking lot was empty. But it’s all good between me and Denny-boy now that he’s on Fox News all the time.”

Representatives for Miller, the Tennessee Titans, the National Football League, and Fox News Channel could not be reached for comment. 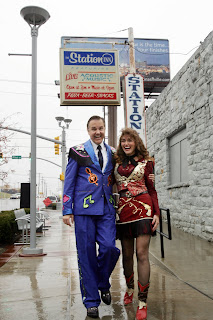 It wasn’t until six weeks ago that Doyle Mayfield’s collision course with fame got back on track when, back home in Mooney’s Gap to take care of some unspecified community service, he stuck his head into the tiny VFW Hall for a cold one. There on that tiny stage he beheld his destiny, an angelic singer, warbling the distaff hits from the Doyle & Debbie catalog, and already named Debbie.

“I know it’s the big break I’ve always been looking for,” says Debbie Purdy, who after five minutes of conversation with Mayfield that cold, gray night joined Doyle & Debbie full-time. “It’s like I was born to be part of this amazing country music tradition, what with me being named Debbie and all.”

In the very short time they’ve been together, Mayfield and Purdy have already added two new songs to the act, the linguistically poignant “ABC’s of Love” and the destined-to-be hit “For The Children,” which Mayfield is already shopping around Music Row.

“We haven’t even finished the demo yet, but we’ve already been turned down by Faith, Martina, Carrie, Trisha, Reba, and Shania, so there’s some buzz on it around town,” Mayfield says. “We’re hoping to get it to Jessica Simpson by the end of the week, Lord willin’.”

News of the newly reconstituted Doyle & Debbie spread throughout the entertainment community like wildfire. Late night talk staple Conan O’Brien was the first in line to grab the duo for his show, with Doyle & Debbie scheduled for an appearance this Friday, even if Purdy isn’t quite sure who O’Brien is.

“I’ve been singin’ till three o’clock in the morning for the past 15 years and we didn’t have TV down at the VFW Hall, so I haven’t even seen this ‘Late Night with Conan The Barbarian’ stuff,” Purdy says. “Is this the fella that replaced Arsenio Hall?”

But the big news for Doyle & Debbie is their Tuesday night residency at the world famous Station Inn, which started January 8, giving longtime fans the chance to see the old hits (and new Debbie) in an intimate setting. “This is something I never thought I’d get to do,” Purdy says. “Here I am, taking Nashville by storm, right alongside the most famous man ever to hail from Mooney’s Gap, doing it right in the shadow of massive amounts of condo construction. It don’t get any better than this.”

Wonderful. I am a long-time fan and always wondered about the back story. Thanks for making it available to us all.