(This article also appears on TuneInMusicCity.com)

It boils down to contributing something small to something big for someone small.

The “WOW Shares” event at the Curb Event Center Wednesday found more than 1500 volunteers from the Christian music and Belmont university communities doing just that: donating a little bit of physical effort toward the goal of packaging more than 400,000 meals for children in more than 60 countries around the world.

The event was aiding Feed My Starving Children, a faith-based relief organization that has dozens of these packing events at their three Twin Cities-based and one Chicago-area facilities year-round, not to mention a number of these off-site events. 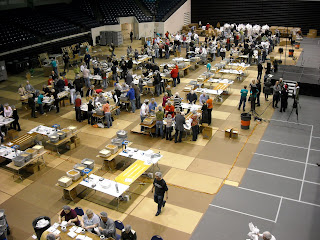 The Belmont event is the group’s largest single-day event to date, the continuation of their work with EMI Christian Music Group that started last year. This event with Christian music’s three largest companies -- EMI CMG, Provident Music Group and Word Entertainment -- essentially served as a de facto industry-wide Christmas party, with an emphasis placed on the volunteer work rather than just another holiday celebration.

That spirit of service fit right in with what FMSC does every day.

“Part of our mission is that it’s done with volunteer work,” says Laura Nielsen, the group’s manager of off-site operations. “We really believe that the hand-to-hand connection is important, not only for the people who are packing the food, but for the people receiving it as well. They’re also our largest donors. When they have this experience of packing the food themselves, they tend to donate more.”

The three Christian music companies joined forces years ago to create the WOW series of compilation products, designed to highlight the best music in the industry. The “WOW Shares” initiative grew out of that 10-year-plus intra-industry relationship, and is something executives from each company hope can flourish.

“We’ve always been charitable with WOW, and part of the proceeds since the beginning have gone to charitable organizations or events,” says Provident president/CEO Terry Hemmings. “We want to continue to do that, and through this, maybe we can do it in a little more organized fashion than we have in the past.”

“What we’ve loved is that we could roll up our sleeves, get our hands dirty and participate in helping others around the world,” says EMI CMG president/CEO Bill Hearn. “We basically give our Christmas away to those who are less fortunate than us.” 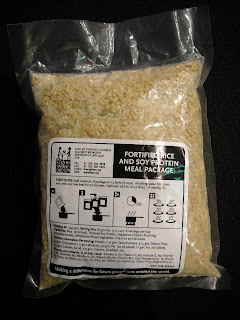 Additionally, the event continued the relationship the industry shares with Belmont, long a partner with the various spokes of Nashville’s music business community. The FMSC effort gave Belmont students a chance to wrap up their extremely busy fall semester with a chance to help others.

“In the past at this time of year, we’re either ratcheting down or we’re doing some big celebration to blow off steam,” says Andrew Johnston, Belmont’s associate provost and dean of students. “The thing that turned Belmont students on was the chance to do something for starving children, and frankly, to do something of this scope. What we do here can feed 1100 kids for a year. That’s just about the size of our freshman class, so we were pointing that out to make the connection.”

Artists from each of the three companies -- Provident’s double Grammy nominee Brandon Heath, along with Word’s Francesca Battistelli and EMI’s Josh Wilson -- performed a special noontime concert for the volunteers, and Heath says events like this can help foster creativity going forward a lot more than the daily machinations of the music industry treadmill.

“I feel more purpose if I’m doing things like this, in addition to the music,” Heath says. “You can really focus on your career and the charts, but those things will go away. This is making an eternal difference, and what’s so cool about it is that it’s so simple. It’s an act of sacrifice and kindness, and it has a greater impact than a lot of things.”
- Lucas Hendrickson at 6:28 PM