This is me...brimming with confidence...

Anybody else concerned about this approach to taking out a broken spy satellite?

WASHINGTON (AP) -- The Pentagon is planning to shoot down a broken spy satellite expected to hit the Earth in early March, The Associated Press has learned.
U.S. officials said Thursday that the option preferred by the Bush administration will be to fire a missile from a U.S. Navy cruiser, and shoot down the satellite before it enters Earth's atmosphere.

The officials spoke on condition of anonymity because the options will not be publicly discussed until a later Pentagon briefing.

The disabled satellite is expected to hit the Earth the first week of March. Officials said the Navy would likely shoot it down before then, using a special missile modified for the task. Other details about the missile and the targeting were not immediately available.

But the decision involves several U.S. agencies, including the National Security Agency, the Department of Homeland Defense and the State Department. 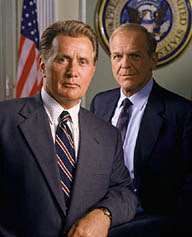 Is it just me or does this remind anyone of The West Wing episode called "The Drop-In" where Leo is trying to get President Bartlet to continue funding a missile defense shield, and has him sitting in on a sitroom monitoring of the latest test when it goes, shall we say, predictably awry...

The problem is the half-ton of frozen hydrazine inside a fuel tank that can apparently survive re-entry, it being internally-refrigerated by the hydrazine and insulated. If the tank hits the ground and doesn't crack open, it's a micro-hazmat site.

If it hits the ground in a populated area, the hydrazine is pretty toxic, and so it's better if it doesn't do that.

The plan is apparently to use a SM-3 to (it is hoped) crack open the tank so the hydrazine evaporates or burns up at re-entry. If it gives you any comfort, they're not just aiming for the 5,000lb satellite moving at 17,000 mph, they're aiming for the tank itself. They're either ballsy or taking hubris to the next level, but frankly compared to hitting a smaller warhead (the size of a coffee table), the bus-sized US193 is an easier target.

The land-based interceptors haven't had nearly as successful a track record as the Navy's TMD program. That's why the Navy gets first shot.

If they knew where it was coming down I don't think they'd shoot it, but satellites that de-orbit usually do so on-purpose and into deep, deep water.

I'm not saying the attempt wasn't needed or useful. I'm just saying, especially in the lead-up to it, that the solution seemed a little far-fetched.

Hopefully, we'll get to hear some more details, if nothing else but to satisfy the inner geek of all of us who watch "Mythbusters" quasi-religiously...