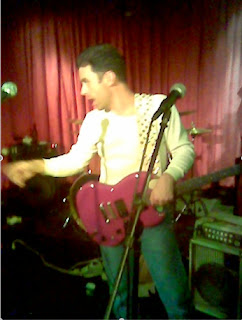 I blame Jeff Boswell for the ketchup on my keyboard.

I mean, when you’re invited to something called “Pizza Party USA,” it’s not out of the realm of possibility to think somebody’s gonna be there with a pie, right?

Apparently not, but I’ll get over it, especially since I’ve once again been reminded of the resilient nature of both music and the spirits of people hellbent on making it.

Music will always survive, no matter how much (or how little) effort you put into preparing for a semi-one-off Sunday night show.

PPUSA is one of about 37 music collectives (remember when we used to call ’em “bands”?) Boswell is part of, the most visible of which is Guilty Pleasures, the outfit through which we first made our connection (even though we lived within 25 feet of each other at one time). Jeff promised only one thing, besides an Al Jarreau cover, from the evening’s experience. “We’re doing all the things Guilty Pleasures is afraid to do,” he admitted.

And did they ever deliver. 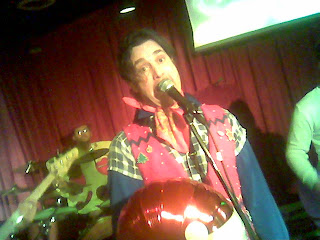 Yes, Yes was merely prologue to the scattered and smothered covers Pizza Party (which also featured Caryn Cast on keys, Troy Powers on bass and Steven “Stuffed Crust” Crowder on drums) ran through at The 5 Spot Sunday night, setting the holiday tone early with the metal classic “Johnny Died on Christmas,” delivered as only a cowboy-shirted, fauxhawk sportin’ man with a corn syrup blood capsule can.

If there was a theme to the evening, it had to be the complete and total lack of a theme. What band in their right mind would mix Callaway’s “I Wanna Be Rich,” the one-and-only opus from MC Skat Kat (with whatsername along for the ride) “Opposites Attract,” the post-Dirty Dancing Career Renovation Eric Carmen’s “Make Me Lose Control,” and a very respectful (despite the rampant end-of-the-table heckling from myself and Peter Hyrka) take on INXS’ “Mystify”?

This one, that’s who. 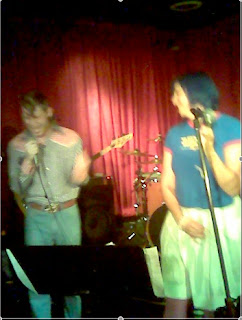 We learned some things this night as well: what was really happening when you read between the metaphors from “Gypsies, Tramps & Thieves,” that you can fake a 5.1 stereo mix live when you start “You Belong To The City” with the sax player in the back of the room, and, of course, the proper way to drink a shot on stage. Twice.

There were the poignant moments as well, such as the thought that maybe the entire audience should be on the stage singing the chorus of “Do They Know It’s Christmas?” but then we realized Bob Geldof wasn’t there to conduct, so it’d ultimately be pointless.

In the end, and all kidding aside, it was another one of those nights where it’s great to realize the fun in the familiar, that taking music and these songs in particular too seriously strips the life out of playing them, and sometimes (shoot, more often than people in this town are willing) it’s just great to get up there and enjoy the process.

Still, it means that I’m suckin’ down a cheeseburger at 1:45am, and dabbing napkins between the “R” and “T” keys mopping up runaway condiments. No biggie, though…it’s not like I needed those letters or anything.
- Lucas Hendrickson at 2:09 AM

Hey Lucas, check out my photos at

I tried to email you the link but your AIM doesn't translate to an email...

my email is john.brassil@vanderbilt.edu, drop me a line!