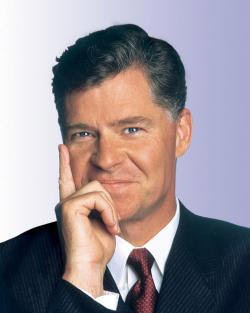 As much as I've breathlessly extolled the virtues of Keith Olbermann's recent work, if it hadn't been for his tag-team partner on The Big Show all those years ago, KO would be doing weekend fill-in sports at a station in El Paso right now.

When Dan and Keith did SportsCenter together all those years ago, it was magic. It's not their fault they did catchphrase-driven sports highlights so well...it's the fault of all the local schlubs who tried (and failed) to copy them that we have the dearth of good local TV sports coverage.

For Patrick, the phrases weren't the point, they were the punctuation...but for too many of his peers at the network and countless pretenders on the local level, they became the fast food upon which they too often feasted.

KO became more famous because of his petulant partings with a number of TV outlets, but Dan remained a steady and creative force within ESPN...but it didn't really surprise me yesterday when he announced his exit.

Dan and Keith were on Letterman last month, obstensibly to promote their shared hour of Dan's weekday radio show, but I remember in watching it first as it aired and later on YouTube, that Dan's body language seemed a little off. He was slumped in his chair, he let KO do most of the talking, and generally seemed disinterested to tell the "bulging disk" story that is so prominently a part of ESPN lore.

Now I wonder if that appearance was a case of "a little too little, a little too late" (ie., ESPN's PR folks getting off their cans to promote the show when the patient was too far gone), or if Dan had just recently made up his mind and didn't want to give it his all because he knew the show he was there to promote wouldn't exist in eight weeks or so.

I don't know if I can characterize the speculation as "rampant" as to where Dan will land. Last week came the story that the producers of The Price Is Right had contacted him and wanted him to come in for some auditions. They could do a lot worse.

And even if he takes over the reins of TPIR, he could still do a daily midday radio show, albeit based on the West Coast. If that happens...and all fans of the fusion of sports and pop culture should hope it does...all I know is they'd better put it on one of the FM signals here in the Music City. We've got sportstalk all over the place, and DP deserves to be heard around here as best he can.
- Lucas Hendrickson at 12:11 PM