There's catharsis in the familiar.

And when you couple the familiar with talent and joy and friendship and just a smidgen of suffering, maybe you get to work out the toxins in your brain you didn't even know were there.

My two favorite quasi-regular musical events in Nashville both rely on heavy doses of the familiar. Guilty Pleasures, a ragtag (though certainly less so these days) collection of friends doing '80s covers. Grimey, Trisha, and the whole lot of 'em have turned playing to 100 people at the Slow Bar into playing for a packed house of 1200-plus at the Cannery Ballroom, yet all the while keeping it fun (well, at least when people aren't grousing about learning so many new songs...)

The second collective that never fails to deliver is The Long Players, Bill Lloyd's labor of love that takes a classic rock record, pairs the songs with various vocalists, and the rather ridiculously talented band plays that record from start to finish. Then they take a break and come back to play a couple hours worth of tunes from the featured artist. 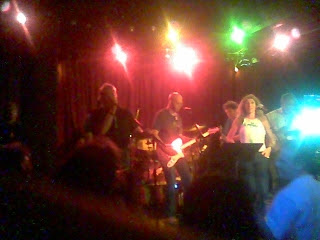 Last night, it was Layla and Other Assorted Love Songs, the epic double album from Derek & The Dominoes, the one-off (essentially) project Eric Clapton helmed before taking time away from the music business to deal with his own addiction issues.

Along with the title track, which lives on on classic rock radio in either the truncated original version or the acoustic reinvention that reintroduced Clapton to the early-'90s MTV generation, the record includes classics like "Bell Bottom Blues," "Keep On Growing," and a blistering cover of Hendrix's "Little Wing."

The LP's roster of singers for the night included a bunch of names you'd recognize if you've read country music liner notes over the past couple of decades, but the two that drew me in this night were people I'd known about since before moving to Music City: Dave Perkins and Ashley Cleveland.

Both Dave and Ashley (along with her husband Kenny Greenberg) have knocked around a bunch of different facets of the music industry, including the "contemporary Christian" side, with varying levels of success over the years. But for those of us who aren't afraid to throw away our cookie-cutters when it comes to matters of art and faith, both have contributed greatly to our enjoyment of music over the years, Dave with his solo stuff, production work and time in the band Chagall Guevara, and Ashley generally being one of the greatest singers in Nashville, period (and the only woman to win a gospel Grammy for a record that had a Rolling Stones cover on it).

The Mercy Lounge was packed, hot and sweaty, and the crowd loved the renditions of the songs off Layla. But the bulk of the audience filed out when the band took their break...and they have no idea what they missed.

Because on the third and fourth songs in the bonus period, you had a collection of people...wondrously talented, flawed, brilliant, human beings...absolutely rip two Clapton songs to shreds.

Ashley introduced her redux as "more of a cautionary tale" before the familiar chords of "Cocaine" kicked in, and together with fellow powerhouse vocalist John Cowan, sang about the powers and dangers of addiction from the bottom of her soul and with a smile on her face. Ashley can smile not only because she came through her own battles intact, but she still gets to do what she loves with a man she loves, and together, they do it better than almost anyone in this town. 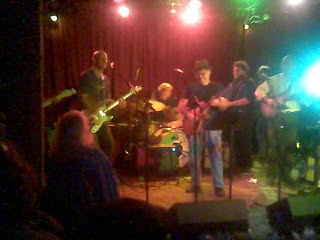 And then Perkins retook the stage, and in front of a five-guitar attack that included himself, Greenberg, Lloyd, Steve Allen and Fred Knobloch, utterly destroyed a cover of "Crossroads." It was loud, it was ferocious, it was daring, it was defiant and it was fun. When Perkins and Greenberg stood at the front of the stage for the last eight-bar solo opportunity, they were essentially dueling, daring each other to greater and greater levels of creativity. (About 10 minutes later, we ran into Kenny and Ashley as they were leaving, and Kenny was still beaming. "Dave was the first guy I played with when I moved to town," he said. "We played a show at Springwater and he just kicked my ass. When we finished 'Crossroads', I said to him '30 years later, and you're still kicking my ass.'")

When the final cymbal crashed on "Crossroads," and when we stopped cheering what we'd just seen, my friend Greg turned to me and said, "That's it. I'm out. It's not going to get any better than this." I agreed and followed him out the door.

I'm sure there were other highlights left to be played...after all, they still hadn't gotten to "I Shot The Sheriff." But there's something to be said about walking away from the table when you know you've gotten your fill. You're satisfied, you're happy, and hopefully you're re-energized, ready to take on the next task ahead. When you get back to the familiar.
- Lucas Hendrickson at 1:05 AM