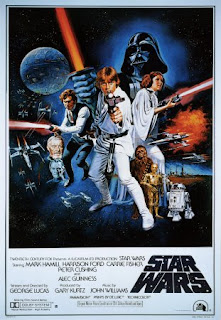 The tube and blogosphere alike are atwitter with reminiscences both personal and professional on the impact the Star Wars franchise has made on pop culture and people in general, and I'm certainly no exception. (Just ask my mom how many times she's moved my collection of the original Kenner action figures/vehicles around in her storage building in Oklahoma.)

This is how much of a geek I am: I stumbled across G4TV's coverage of the fan convention this past weekend in L.A., watched all two hours of it (including the endlessly promo'ed appearance of host Olivia Munn in The Metal Bikini...sue me, I'm a guy...), then went to Subway, got a sandwich, came home and parked myself in front of the TV to watch my DVD copy of Ep. IV.

Which, of course, is always somewhat of a disappointment. Not from the lack of the big screen experience, but mainly from knowing that this movie is not the same movie I remember so fondly from childhood. Literally. 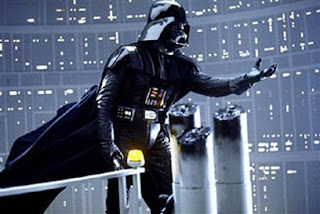 Lucas has so endlessly futzed with the original three movies that in many ways, they're unrecognizable from what first appeared in theaters. (I have neither the time nor the patience to get into how bad the modern trilogy is...or to mourn over how the Greatest Villain In Movie History was turned into a sniveling puss at the end of Revenge of the Sith.)

From Han shooting first, to overdubbing stormtroopers voices with Jango Fett's Maorian twang, to thrilling-yet-pointless additions to the Death Star battle...these are but a few of the "tweaks" George has made to the films that serve only to distract longtime fans from the visual rhythms they had come to expect after repeated viewings.

In the midst of all the 30th anniversary hullabaloo comes word that Lucasfilm is going to create 3D Imax versions of all six films, which will most certainly bring about more changes that don't need to be made. Which, of course, brought about the exact same thought shared by a bowl of petunias that improbably materialized over the planet Magrathea: "Oh, no, not again."

Yeah, the South Park guys said it funnier and better and more profitably in 2002, but should George Lucas stumble across this blog, let me add my voice to the throng: Please, for the love of god, stop.

Let them be. Create something new (but maybe, just maybe, let somebody else write and direct). Go off and count your billions.

But while you've stated time and again that movies are never truly finished, just because you can go in and make changes/revisions/whatever you want to call them in this new digital age, doesn't mean you should.
- Lucas Hendrickson at 11:58 AM

agreed totally haha.. but classics like starwars is more than continuation of its first episode :)

I never wanted anything so badly in my life in the summer of 1977 as a lightsaber.

The presence of all four of my limbs is a testament to the wisdom of nobody selling an actual lightsaber back then.

And yes, I did want to smack Hayden Christensen (who will never be Darth Vader to me) by the end of Episode III.