This morning on campus... 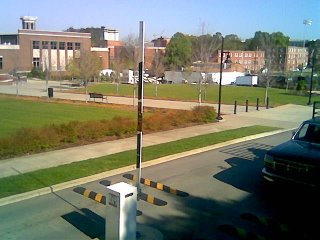 The lessons learned from last year's show seem to come in the form of CMT taking up a boatload of parking spaces this time around, with tour buses taking up three roads and more than a few Curb Event Center entrances in preparation for tonight's event.

This morning, as I exited the parking structure nearest both the Curb Center and my classroom, my path to the classroom was pretty well blocked by barricades and yellow windbreakered security personnel.

I had one student make a mad dash across some part of campus under lockdown, and when he was told he couldn't cross at that point, he shot back "30 grand a year tells me I can..." and just kept walking.

Granted, that's about as far as campus protests go these days, but I was quietly proud...
- Lucas Hendrickson at 4:12 PM