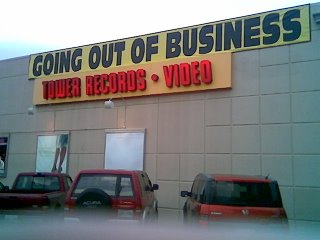 ...at least until the inventory runs out.

Had some time to kill the other day, so I went over to Tower Records on West End and thought I'd check out how the slow divestiture of their merchandise was going. It continues to be sad, and as I drove into the parking lot and saw that one of the four poster boxes on the exterior wall was empty (much like the interior 25% of the store was empty), it hit me again that Tower will soon be but a memory.

But, like a good little media consumer, I did my part to help lighten the load (especially since all CD's were 30% off, plus another 10% because it was Tuesday) and picked up the new Barenaked Ladies, Venus Hum, Mark Knopfler and Emmylou Harris, and yes, the new, oh-so-controversial Dixie Chicks record.

Grand total...a smidge over $40 spent, quite honestly the most I'd paid for music in quite a while. Hence, the demise of Tower. (No, I'm not saying I'm the one who coulda singlehandedly kept them afloat. I have delusions of grandeur at times, but come on...)

But when all the numbers come in, and the stats show that it's the folks over 30 who are paying for music at all these days, it's hard not to wonder what the state of the mass media world is going to look like this time, next decade.
- Lucas Hendrickson at 11:54 PM

Glad there's another BNL fan out there. I don't know any other ones around here.

In fact, the horrified looks I sometimes get when I explain that 'Barenaked Ladies' is just the name of the band are usually enough to discourage me from discussing it with anyone. Marci is a BNL fan as well, but as far as I know we're pretty much the only ones.

I particularly like 'Bank Job', 'Easy', and 'Wind It Up'. I liked that they had a YouTube video contest for air guitar for 'Wind It Up'. Those guys are funny, harmonious and generally fun to listen to.