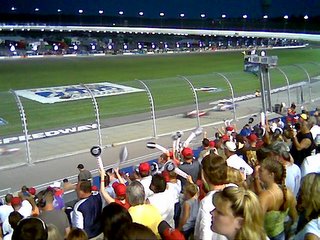 I like to consider myself a full-blown, red-blooded American male, though my political leanings might cause some to scoff at that notion. To which I'd reply, "Come say that to my face, and you might think differently."

Anyhoo, despite that notion, I'd never been to any sort of automobile race until Saturday night, when Dw/M and I, along with our friends Craig and his lovely wife Taylor, and The Perfesser and his lovely wife Ann, trekked out to the Nashville Superspeedway for the Firestone Indy 200 IRL race.

More scoffing will probably come my way, first from the NASCAR purists who think the only real racing is done with fenders and trading paint, and from other neanderthals who think, "IRL? Isn't that the league where that chick drives?"

To which I'd reply to the first, "No," and to the second, "Yeah, and she finished fourth, so zip it." 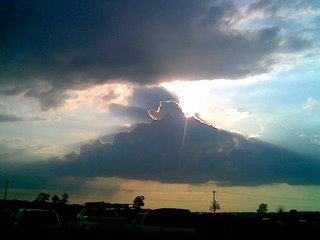 It would have been hard to order up a more perfect day for a race...OK, the humidity levels could've been a few dozen percentage points lower, but that's neither here nor there. We eschewed the 100-lap race beforehand to get to the Speedway parking lot (OK, parking pasture is more like it) at around 5:30pm, and even though the half-dozen of us were pretty much tailgating neophytes (hey, if I'm at a sporting event, I'm usually working), up went the ten-buck portable grill, aflame went the "set the whole thing on fire" bag of charcoal, and we had brats in about 25 minutes.

We strolled into the Speedway proper (with our allowed six-pack coolers full of beverage...nice concession to the masses, there), took our seats on the 24th row about 30 yards behind the start/finish line, politely applauded through the driver intros, checked out the starting grid and awaited The Command.

Even though I'd never been to a race before, I knew enough to get hold of some great little earplugs (rated a 26 out of a 30 scale) and prompted Dw/M to insert hers as well, just before The Command. When the weasely Firestone kid from "The Bachelor" said, "Gentlemen...(dramatic pause) and lady...start your engines!" that's when it all changed.

As the pace laps rolled out, and they revved those rockets up for real to start the race, Dw/M turned to me and said, "OK, I get it now." 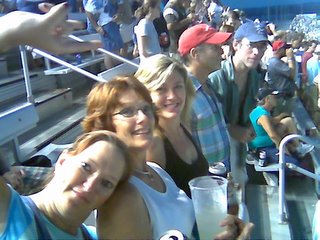 As these kinds of races go, it seemed (and was later confirmed to me by press reports) that it was fairly uneventful. They went a staggering 65 laps under green to start it, a minor caution sending most of the field to the pits for the first time, but from then on out it was fairly routine...if you can call whipping around a 1.3 mile track at 200mph routine. A couple of minor wall scrapes took two cars out, and mechanical problems forced another four off, but 12 cars finished the race, with Scott Dixon (say it with me...WHO'S HE?) taking home the coveted Gibson guitar trophy.

Dixon said later he had a bet with someone that if he won, he'd smash the guitar in the ultimate fusion of rock star/race car driver diva fit, but when he finally did win (his first on an oval track in more than three years) he pussed out. I don't blame him, really...it's a nice guitar. 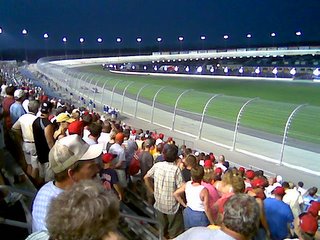 One more note: it was the loudest thing I've ever witnessed in my life. After one of the restarts, when most of the field was on the back stretch, I slipped one of the earplugs out and was just punished by the sound. Craig and The Perfesser, audio experts both, talked about the Doppler effect, the near-constant high-pitched whine, the phase shifting, all that soundgeek stuff. To me, it was just damn loud. It was so loud it just made you laugh...until you turned around and saw a kid no more than seven years old sitting there with no ear protection at all. Then it just made you mad. It makes you wonder if some people even want to be parents at all.

Afterwards, we retraced our steps back to our makeshift two-vehicle compound, recapped and relaxed as the bulk of the crowd filtered out. Craig had been to this race before, taking off on a whim last year by himself, and while Taylor had grown up around stock car races as a kid, for the rest of us, it was our first experience with the cathedral of speed. Don't know how much I'd like a full-blown NEXTEL Cup race (not too fond of crowds, and a quarter million folks in one place would definitely bend my brain), but the next time someone suggests heading out to our local Superspeedway, I'm all over it.

Especially if free tickets are involved...can't give up my Overdeveloped Sense of Entitlement (tm pending) after all.
- Lucas Hendrickson at 2:30 PM