"Just because you're paranoid..." 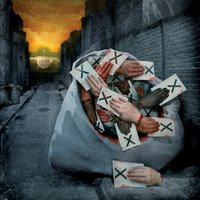 This will be discounted by the starboard side for many reasons: the publication in which it appears, the last name of the author of the article, that it's "old news" and "we need to move on for the good of the country."

But this intricately researched article concerning the 2004 presidential election and questions of voter fraud scared the bejeebers out of me.

Do I have any solutions? No...although getting Diebold out of the process might be a good start. Having verifiable paper trails might not be a bad idea. Standardized ballots wouldn't be out of the question. Independent election officials, rather than political appointees such as secretaries of state, running the process might be a way to go. Shoot, any thinking person sitting down for five minutes could think of a dozen logical ways the process could be more fair and allow every vote to be counted.

But that wouldn't be very expedient to the political process, now would it?
- Lucas Hendrickson at 11:02 AM

Lucas, I don't have to find a right-wing source to discount Robert Kennedy's article and the claims about 2004 election fraud since there are some on the political left that do it for me.

I do think voting is a problem, but the same accusations of voter fraud could fairly be levelled at Wisconson in the 2004 election, which went narrowly to Kerry. The difference is that the winning side has little to gain by calling into question the results of the election, and the country has little to gain (as we well know from 2000) by fighting in the courts what should have been decided by democratic means. Electronic voting does have the risk of near-undetectable voter fraud, and I was more than a little dismayed that the optical scan systems that have served Texas well were thrown overboard in 2005 for an electronic system. A paper trail would be helpful but who keeps their reciepts for that, and if there is a dispute does the side with the most reciepts win? If you can forge a ballot you can just as easily forge a reciept.

It's a fundamental question of trust, and it's troubling that we should have to consider such basic questions. People are willing to cheat because the stakes are perceived to be so high -- lessening to control of government over our daily lives would be one way to substantially lower the impetus for wrongdoing as well as lower our taxes.