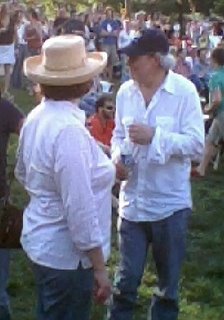 Other cities would kill...OK, maybe not kill, but willingly deplete their budgets to have the kind of talent that graced the stage. The parts that I saw/heard: DeSol revved up the crowd, Buddy Miller brought them back to earth via his observations of the heavenly, and Sam Bush just flippin' rocked the house. As a music fan, I'm extremely lucky to live here.

(On a side note, anybody not moved by Buddy's United Universal House of Prayer album needs to have their heart checked. On a day devoted to raising the world's consciousness about protecting the planet, and in front of a crowd probably not expecting songs circling about the idea of faith, Buddy's humble, sincere nature wrapped up in world-class talent, made him the highlight of the day. It's just a pleasure to watch him work. And if you're so inclined, say a quick prayer for Buddy's wife Julie, an incredible artist/spirit in her own right, who's been up against some health/family issues of late.)

Cynics from both sides would point to the large number of SUV's parked around Centennial Park for Earth Day and make some sort of snide remark. As a centrist trying to abide by the idea of "live and let live," I'll say this...if you're driving an SUV, please just do your part and be responsible about how you drive.

In the interest of full disclosure, I'll say that I posess two vehicles that would make the average global warming extremist faint dead away: a 1995 Ford Thunderbird with a V8, and a 1999 Chevy Surburban my parents generously "sold" me last year. However, as a large land mammal, I can't fit in your average economy car, and as a freelancer, I can't afford a hybrid, though the technology is getting better.

But the idea of conservation needs to be more than the progressive mindset of preserving the globe at the expense of common sense or the conservative though process of preserving one's wallet size (personal and/or corporate) as valuable over all else.

In other words, conservation in my eyes means being a good steward of all your resources, natural and financial.

In this age of $3/gallon gas (and probably climbing much higher than that in the near future) as well as higher electricty costs (thanks ever so, NES), I keep reminding myself of those things that can stretch all those resources at the same time:
It's amazing how much the little things add up, not to mention help out. And it's amazing how far the little reminders can aid the cause...both natural and financial.
- Lucas Hendrickson at 7:34 PM