Winning the war on bloviation...

UPDATE: K.O.'s been on quite the media roll lately, what with appearances on The Colbert Report and this fantastic hour-long interview on CSpan's Q & A. 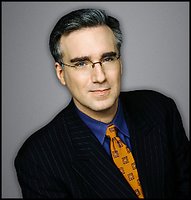 If you check out my MySpace page (and really, why haven't you?), you'll find that I've reframed the "Heroes" section "Examples of Excellence," and while that list is currently alphabetical by first name, should there be a numerical designation, Keith Olbermann would probably be in my top five.

Before Countdown, before his Sunday night show on Fox Sports Net, before his first stint at MSNBC where he was forced to shove the Monica Lewinsky story down our throats for 240-someodd consecutive days (much to his oft-stated chagrin), there was K.O. alongside his tag team partner Dan Patrick on the original Big Show on ESPN.

His highlight packages, his asides, his references...all of Olbermann's material was smart. Not smart-ass, just smart. He loved the world of sports, and he hated when the world interfered with sports.

And that's how he presents his nightly news/talk/interview show now: he seems to want the world to be a better place, and he gets frustrated and points it out when idiocy (most recently in the form of a certain FNC bloviator who shant be named here) thwarts that goal.

Thankfully, he's back in the role of sports commentator weekdays for an hour on Dan Patrick's radio show, and if you're a fan of the fusion of sports and the rest of the world, give the new Big Show a listen. It's the best 60 minutes on radio (that aren't being delivered via the Spin Cycle on Lightning 100, natch).

If the folks at NBC Sports are smart, they'll attach K.O. to the Sunday night NFL package they've just spent a fortune acquiring, letting Keith contribute a weekly feature or (better still) putting him in a studio role alongside Bob Costas and creating the single greatest NFL pre-game/post-game show EVER.

In the meantime, if you like your news/commentary with some snark instead of irrational amounts of bile, if you'd like to see brains win out of bullying, if you're tired of seeing the blowhard bastards win...tune into Countdown weeknights at 8pm/7pm Central on MSNBC. You might be glad you did...Keith certainly would.
- Lucas Hendrickson at 11:46 AM